In Jeremiah 23:4, we read what the Lord did to the shepherds who were not caring for the flock as they should 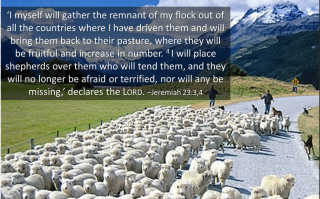 "I will place shepherds over them who will tend them, and they will no longer be afraid or terrified, nor will any be missing,” declares the Lord"

God sacked or fired those whose performance did not meet His standards for care, which was simply to tend to the needs of the sheep. What was the outcome? The sheep would be cared for an no longer be terrified—neither would they be missing in action.

Shepherds must make it their aim to help set God's people free from fear, not the fear of God if they do wrong, but the fear that is still part of their sin nature as seen when Adam and Eve hid from God because they were afraid. This fear includes fear of getting ahead of the Lord or taking action not in God's perfect timing, fear of failure, fear of the shepherd's disapproval, or fear of making a mistake. What can you do as a shepherd to help the people be freed from their fears?

You can model a lifestyle free from fear. You can remind the people (and themselves) that you too are part of God's flock and subject to the same fears, thus dispelling any notion that you as a leader enjoy a superior spirituality. You can teach the people that God isn't trying to trick or entrap them but wants them to know and do His will, and that they can be confident of His help to get the job done. If you do that, God will commend you for a job well done. If not, then the God who hired you and set you over the sheep can just as easily remove you, replacing you with someone who has a heart for the people.