Home Archives Profile Subscribe
The End of Self
Easter Power

On the Road Again

Here is a post I wrote in 2006, but it's still relevant to thoughts on my travels. Since 2022 looks like a busy travel year (although not to 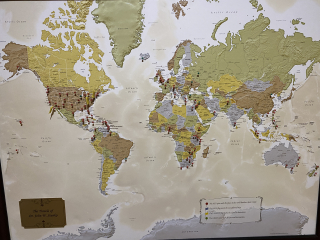 the extent of my life on the road when I wrote this), I thought I would dust it off and share an edited version with you, for the content is still describes my thoughts about life in a hotel and on a plane. (The picture to the right is a wall map with pins in it of all the countries I have visited.).

I'm sometimes asked about my travel schedule and how I like being on the road so much. I usually answer in jest, "A moving target is hard to hit." I've also been known to say, "I'm not sure that God knows where I am some times. And if He doesn't know, then the devil doesn't either!"

Seriously, there are a few thoughts that sustain me while I'm on the road. The first is the knowledge that my father, who served in World War II, was away from home for several years serving his country. I'm involved in even more important work of the Kingdom, so I should be willing, in my mind, to pay a price, and for me, that includes being away from home.

Don't get me wrong. while I enjoy traveling, I also love being at home. I wish the doors would open in the States that have opened in other countries. I wouldn't mind staying busy at home. (Note: I was able to do that during the pandemic and was quite happy, not depressed or pining away for life at 39,000 feet.) And I miss my wife terribly when I'm gone. (You'll have to ask her if she misses me). I admit that I get a bit miffed when people glibly say, "You're never home!" I'm home about one third of the year, and my travels pay for the home we do have.

As people get to know me and my at times outlandish humor, they will often ask my wife, "How can you live with him?"  Her answer is, "I don't have to; he's seldom here. God has made a way where they seemed to be no way!" So until something else opens up closer to home, I'm destined to follow in Paul's footsteps and be on the move regularly. I only wish I could be as effective as Paul was when I go.