When Peter F. Drucker was alive, I tried to attend his Foundation’s annual leadership conference every year.  For me, it 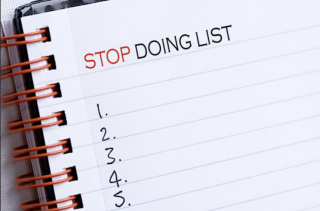 was always a time to reflect and refocus on the coming year.  In 1998, Jim Collins, author of Built to Last, was on the conference program. During his presentation, he talked of his goal to read 70 books annually.  Up to that point in his life, he had read about 35 books in a year’s time.  Collins told us how he bought a new chair and lamp to facilitate his anticipated increase in reading.  At the end of the year, however, he hadn’t reached his goal – he still read “only” 35 books.

Collins and his wife tried to determine why they hadn’t increased their reading and they came to the realization that they would have to make some serious adjustments to do so. They got rid of the cable television hookup in their home—and every year after that they consistently reached their goal.  “Most of us have a to-do list,” Collins said,  “but I think as leaders we also need a ‘stop to-do list.’ We can’t keep adding to what we do without at some point taking away something we’re already doing to make room for the new activity.”

A “stop-to-do” list.  What a novel idea!  Imagine if you and I and the organizations that we serve began to evaluate our activities with a view toward eliminating those that were outdated. Or stopped doing some things because there were other opportunities that would or could produce greater results. Or had some mechanism that helped us recognize when an activity, even a good activity, no longer served the vision or mission of the organization.

Peter Drucker speaks the concept behind a stop-to-do list in several of his publications. I quote here from his book, Managing in a Time of Great Change:

What, then, needs to be done?  There is a need for preventive care—that is, for building into the organization systematic monitoring and testing of its theory of the business.  There is a need for early diagnosis.  Finally, there is a need to rethink a theory that is stagnating and to take effective action in order to change policies and practices, bringing the organization’s behavior in line with the new realities of its environment, with a new definition of its mission, and with new core competencies to be developed and acquired.

There are only two preventive measures. But if used consistently, they should keep an organization alert and capable of rapidly changing itself and its theory. The first measure is what I call abandonment. Every three years an organization should challenge every product, every service, every policy, every distribution channel with the question, If we were not in it already, would we be going into it now? By questioning accepted policies and routines, the organization forces itself to think about its theory. It forces itself to test assumptions. It forces itself to ask: Why didn’t this work, even though it looked so promising when we went into it five years ago? Is it because we made a mistake?  Is it because we did the wrong things?  Or is it because the right things didn’t work?

Without systematic and purposeful abandonment, an organization will be overtaken by events. It will squander its best resources on things it should never have been doing or should no longer do. As a result, it will lack the resources, especially capable people, needed to exploit the opportunities that arise when markets, technologies, and core competencies change. In other words, it will be unable to respond constructively to the opportunities that are created when its theory of the business becomes obsolete.[i]

It’s the job of the board of directors or leadership team in any organization to see to it that the limited resources of that entity are directed to activities that are most consistent with the purpose of that entity. Leaders must make sure that the money and people are devoted to the right cause. But often the day-to-day leaders are more in touch with the pulse of the business than the board members and need to help the board understand reality. They need to educate the board members that just because the organization can do something doesn’t necessarily mean that it should do something. It’s at that point that leadership has to make the hard decisions, and that too constitutes the price of leadership.

At other times, the founder or long-standing leaders have favorite, “pet” projects. They want these projects to continue because they like them, not because they’re effective or productive. What’s needed is some mechanism to evaluate activities that will clearly identify those that have outlived their usefulness. Leaders must also do this on a personal basis and learn to say “no.” It’s hard to say “no,” however, if you’re not sure what your “yes” is. One of my favorite stories is found in Acts 6.

In those days when the number of disciples was increasing, the Grecian Jews among them complained against the Hebraic Jews because their widows were being overlooked in the daily distribution of food.  So the Twelve gathered all the disciples together and said, “It would not be right for us to neglect the ministry of the word of God in order to wait on tables.  Brothers, choose seven men from among you who are known to be full of the Spirit and wisdom. We will turn this responsibility over to them and will give our attention to prayer and the ministry of the word” (Acts 6:1-3).

There are three lessons in this passage that will help you or your organization to stop doing one thing in order to do something new.

1. Face reality – As a leader, you must look at reality.  Often the phrase “facing reality” is used to refer to the downside of something.  But it can also be used for the positive.  The apostles faced reality.  The early church was growing, and that was good.  Growth brought problems, however, and this gave rise to a significant complaint from one of the groups in the church.

Look at all the things that are going well in your life or in your organization.  Are you making these things all that they can be?  Do you need to pay even more attention to these unexpected success stories.  And what about the things that are not going so well?  Do you need to keep pouring time and resources into these situations, or is it time to let them go gracefully?

2. Embrace change – Letting something go means that there will be change.  Up to this point in the life of the early church, the 12 apostles had been involved in everything.  But as the church grew, they could no longer be everything to everyone.  They had to delegate and focus on what it was that they did that no one else could do.  They didn’t personally help the widows, but rather came up with a plan to make sure that the widows were helped.

When I say “embrace” change, I mean just that – enthusiastically accept it as a part of life. While change is necessary for growth and for effective leadership, you can’t minimize its impact. As a leader, you must be personally involved in helping followers understand the need for the change. Remember how long it took you to get used to the idea of the change, then be patient and give followers the same time to consume and digest the implications of the change. You must also be accessible to develop the plans for change and to help talk out the implications for followers.  It’s during times of change that followers need to have their closest contact with those in leadership.

One thing that can help others embrace the change is when you embrace change as a way of life and leadership. Gandhi once said, “We must become the change that we seek.” Therefore, you must model the tendency and practice of embracing change before you start dumping change on others.

3. Feed your opportunities; starve your problems – Peter Drucker provided me with this phrase and it’s profound.  Too often we do the opposite – we feed our problems and starve our opportunities. Drucker also gave a good rule of thumb where this concept is concerned. He advised that every three years an organization (or an individual for that matter) should evaluate all their activities by asking this one question: “If we had known three years ago what we know today, would we have started to do, or kept doing, this particular activity?” If the answer is a resounding “No!”, then it’s time to stop doing that activity. If you had known three years ago, for example, that you were going to have spend so much money and time on a venture, would you do it all over again? If the answer is no, then it’s time to stop it – NOW!

The apostles in Acts 6 didn’t get personally involved in the widow problem; in that sense they “starved” it.  Instead they fed the opportunity to pray and preach the word.  The outcome of this strategy was a good one. Acts 6:7 tells us that “the word of God spread. The number of disciples in Jerusalem increased rapidly, and a large number of priests became obedient to the faith.”

Robert Greenleaf also has something to say to leaders about the need to let go of something old in order to embrace the new. He called it “systematic neglect.”

The ability to withdraw and reorient oneself, if only for a moment, presumes that one has learned the art of systematic neglect, to sort out the more important from the less important—and the important from the urgent—and attend to the more important, even though there may be penalties and censure for the neglect of something else.  One may govern one’s life by the law of the optimum (optimum being that pace and set of choices that give one the best performance over a lifespan)—bearing in mind that there are always emergencies and the optimum includes carrying an unused reserve of energy in all periods of normal demand so that one has the resilience to cope with the emergency.[ii]

How about you? What do you need to stop doing in order to undertake a new opportunity? What is no longer yielding the returns that it once did in your life? And how about in the organization you lead? What new opportunities are knocking at the door but can’t get in because the “waiting room” is filled with problems? Take out a sheet of paper and make a stop-to-do list and then have the courage to dialogue with yourself and others about the changes that need to take place.