Walking Down a Different Row 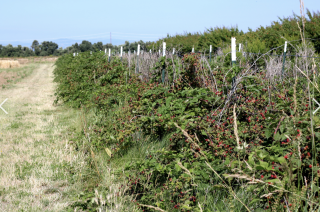 berries. It is hard work for this farm is on a hill, it was hot, and while the berry bushes had plenty of fruit, it was spread out among many bushes. I find it fascinating that I could walk down one row with bushes on both sides of me and see plenty of fruit, but then when I went to the next row and looked back on the row I came from, I saw fruit I missed. I tried to see all there was to see when I went down the first row, but no matter how hard I tried, I could not see it all. What I needed was a change of perspective to see all there was to see.

When I have led cognitive and social learning seminars, I include a phrase, "When you change the way you look at things, the things you look at change." Of course, the things I am looking at don't change, but my perspective is changed according to my approach and angle for viewing. I have used the same concept when I have taught preaching classes, for I tell students that they must suspend what they think they know about a verse or passage for even a short moment as they prepare to speak, for as soon as they are convinced they know what a passage says, they will miss what else it may be saying. This is called the lock-on, lock-out phenomenon. As soon as we lock on to what we think we know or see, certain we have seen all the berries or the meanings there are, we lock out the possibility of seeing more.

When I was a pastor and did some marriage counseling, I would surprise couples when we began by asking them to tell me what their partner was about to tell me about them. "What is your wife/husband going to tell me about you?" Many would make an effort to answer my question, but quickly switched gears to report what was wrong with their spouse. They had locked on to the problem with the other person and had often locked out their contribution to the need for counseling.

What's my point in all this? It is a valuable exercise to put yourself in someone else's place or to shift your perspective from time to time in order to see what you cannot see from where you have been. For example, today in the mail I received a copy of a book The Best Short Stories by Black Writers (1899-1967). Why would I order and read this? I do so because I am not black and I want to read something written by people who don't look like me and probably don't think like me. Since I work with many African Americans, it will help me walk down a different row to see what I could not previously see.

When we don't walk down a different row, it may be because we are not as secure in our position as we would like others to believe and thus need to read or be exposed only to things that will reinforce our current position. That's not wrong unless it is what we always do and thus cut ourselves off from the "fruit" that is right in front of us but we can't see, not because we aren't physically capable or don't want to, but simply because we cannot see it from where we are standing—mentally or physically. Do you have the courage to walk down a different road and see something new? Or will you keep walking up and down the same old row and limit yourself to what you are convinced is all there is to see? While you are answering those questions, I will be reading the book I just got in the mail.