The Acts of Jesus

I have begun G. Campbell Morgan's devotional from the Acts of the Apostles and already in the first 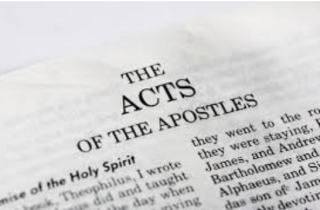 chapter, I have learned so much from Morgan who was known as the "Prince of Expositors" in England through World War II. He confirmed many things I have felt about Acts that i have never seen in print anywhere else.

First is the name of the book: the Acts of the Apostles. There are so many other titles I can think of, like the Acts of the Spirit, the Acts of Purpose, or the Acts of Believers. The book of Acts barely mentions the twelve apostles and then focuses on the ministry of Peter (a little) and Paul (a lot). The book is more like a collection of stories told about people who found their purpose and achieved it through the power of the Spirit—people like Barnabas, Dorcas, Phillip, Cornelius, Lydia, and John Mark. John had to terminate his missions trip with Barnabas and Saul, probably because of tension between him and Saul. I am sure Saul was not an easy man with whom to work.

Luke began Acts with these words: "In my former book, Theophilus, I wrote about all that Jesus began to do and to teach . . ." (Acts 1:1). Notice that he said his gospel focused on what Jesus had begun to do and teach, which means Acts is an account of what Jesus continued to do and teach through His followers in the power of the Spirit. Therefore, I supposed another good title would have been the Acts of Jesus through the Spirit. I have often considered Acts a fifth gospel, which when coupled with the other four, would produce the special number five that would parallel the five books of the Pentateuch. The Old begins with five books as does the New. Only the Spirit could arrange something like that.

The book of Acts takes us on a breathtaking overview of what the disciples accomplished after Pentecost, which should be viewed as Jesus's work. What energy and purpose He displayed! Whereas He was constrained during His earthly ministry, in Acts Jesus was released to do what He wanted to do all along: touch the lives of people everywhere with the love and power of God—introduced through His message, "Repent for the kingdom of God is at hand."

When Acts ends in chapter 28, there is no conclusion, no words that say "and they all lived happily ever after." It just sort of fizzles out, just like Mark's gospel does. As Acts concludes, Paul is under house arrest but nevertheless ministers to all who come to see him. It's almost like Luke ended the book through the Spirit's inspiration to say, "This book has no ending. It is still being written, for Jesus is still doing magnificent and plenteous work and good deeds in the power of the Spirit through His people." When I have taught Acts 6 where the deacons were selected, I pointed out that this was not to institute the office of deacons. Rather, it represented a creative solution to a never-before-encountered problem, leaving us a model to follow for our own encounters with the challenges of our day and culture. We are to add our names to the book by finding and fulfilling our purpose in partnership with the Holy Spirit of Jesus. Is that what you are doing?

Needless to say, I am looking forward to this 58-chapter book, which will take me through the rest of the summer for my devotional reading and study. Stay tuned, for I am sure there will be other things i will share as I make my way through G. Campbell Morgan's latest posthumous gift to my understanding of God's word.