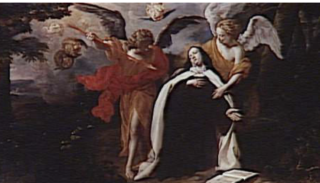 experienced a strange sensation that is difficult to explain. John Wesley described a spiritual encounter he had once when his heart was "strangely warmed." That would begin to describe what I am writing about. This sense is an overwhelming peace and confidence that I am doing what God wants me to do, where He wants me to do it, in a way that pleases Him—and His pleasure overflows into my being. It may be similar to what Eric Lyddell, the Olympic runner said in the movie, Chariots of Fire, "But God made me fast, and when I run, I feel His pleasure."

I have been reflecting on this experience more and more, mostly because it happens to me more and more. It made me think of stories I read about certain saints who were known as mystics because they had strange, mysterious encounters with the Lord that were labeled "ecstasy." The picture with this post is one of St. Theresa who was famous for her ecstatic encounters with the Lord. Of course, the artist's version of her experience is replete with angels and a beatific look on St. Theresa's face. I am not convinced that the ecstasy I am referring to is that supernatural or bizarre.

I found a description online of this ecstatic experience I am trying to describe:

Total involvement with an object of interest is not an ordinary experience because of being aware of other objects, thus ecstasy is an example of an altered state of consciousness characterized by diminished awareness of other objects or the total lack of the awareness of surroundings and everything around the object.
I can't say my consciousness is altered, but it is definitely enhanced to the extent that I lose track of time and could lose myself in what I am doing for any amount of hours. Why am I telling you this?
I tell you this because I have come to the conclusion that this is actually to be a normal incident for anyone involved in purposeful activity. Since purpose is motivated by joy, then joy can so flood our beings that we, like Jesus, say we have "food to eat that others know not of." And what's more, isn't this extreme joy or ecstatic experience what many seek through things other than God, things like sex, drugs, work, leisure, or other "things"? Is it so unusual since God created us to have intense emotional expressions and events? And could this ecstasy actually be a foretaste of eternity where we will "enjoy" God's presence forever?
I don't know the answers to those questions, but I will tell you this: I am not about to renounce or avoid or rationalize my random joyful tsunamis, for they are about as close to pure worship as I have ever had. If nothing else, they serve as fuel for my work, which has taken on new meaning during this world crisis. I invite you to pursue your own purpose to the extent that you too can be aware of God's approval as you express it, perhaps in overwhelming portions. And if you don't know or aren't sure about what I have just written, then just pray for me that I won't drown in a sea of my own ecstatic, purposeful work.