Last week, I discussed innovation and creativity, pointing out that the pandemic caused churches to be creative in their use of technology. I used the example of the synagogue as an example of an innovation that was creatively used in Jewish history, and was wondering what innovations will emerge from this season—or if in our rush to reopen our churches we will abandon ongoing creative use of technology that could lead to something fresh and new in the way churches deliver their "services."

If you have ever heard one of my purpose presentations, you probably heard me start at Acts 6:1-7, 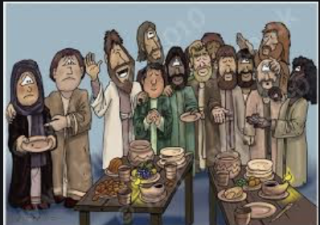 where the apostles chose men to carry the burden of the work among the widows:

In those days when the number of disciples was increasing, the Hellenistic Jews among them complained against the Hebraic Jews because their widows were being overlooked in the daily distribution of food. So the Twelve gathered all the disciples together and said, “It would not be right for us to neglect the ministry of the word of God in order to wait on tables.Brothers and sisters, choose seven men from among you who are known to be full of the Spirit and wisdom. We will turn this responsibility over to them and will give our attention to prayer and the ministry of the word.” This proposal pleased the whole group. They chose Stephen, a man full of faith and of the Holy Spirit; also Philip, Procorus, Nicanor, Timon, Parmenas, and Nicolas from Antioch, a convert to Judaism. They presented these men to the apostles, who prayed and laid their hands on them. So the word of God spread. The number of disciples in Jerusalem increased rapidly, and a large number of priests became obedient to the faith.

The people elected these men to serve or minister to the widows in the church, and the Greek word for service here is diakonia, from which we derive our modern church office of or word deacon.

Many churches have taken this passage in Acts 6 and turned it into a model for church governement and service. In some churches, the deacons are the ultimate governing position; in others they are people who serve by doing practical things in the church like building care, women's ministry and the like. The goal of this essay is not to debate which approach to or interpretation of deacons is correct; the goal is to show that any approach to deacons as a church institution misses the point altogether.

The original deacons were not about church government or tradition; they were simply an innovative solution to a new problem.

As best we can tell, there was no biblical concept upon which the apostles drew to elect and commission the deacons. Jesus had instructed them to care for the poor. Most widows were poor in the early church if they had no other family to care for them. As the church grew, the number of widows increased from those outside the ranks of the Hebrew residents in Jerusalem. The apostles were being called upon to address this problem that had never before been faced. it is interesting that Luke is careful to point out that the problem was between two ethnic groups, the Hebraic and the Hellenistic believers, which shows us that ethnic tensions are nothing new to the modern church

The apostles addressed this problem creatively and used wisdom to come up with an innovative solution. I don't believe they were instituting a church office in Acts 6, but rather an approach the church should take to problems and challenges that are sure to come up in every generation, whether in or outside the church. The were setting a precedent, not establishing a tradition.

When I reflect on creativity and innovation, I think of the verses in Proverbs 8:22-31 where we learn that wisdom was at God's side when He created the universe:

“The Lord brought me forth as the first of his works, before his deeds of old; I was formed long ages ago, at the very beginning, when the world came to be. When there were no watery depths, I was given birth, when there were no springs overflowing with water; before the mountains were settled in place, before the hills, I was given birth,  before he made the world or its fields or any of the dust of the earth. I was there when he set the heavens in place, when he marked out the horizon on the face of the deep, when he established the clouds above and fixed securely the fountains of the deep, when he gave the sea its boundary so the waters would not overstep his command, and when he marked out the foundations of the earth. Then I was constantly at his side. I was filled with delight day after day, rejoicing always in his presence, rejoicing in his whole world and delighting in mankind."

Wisdom is closely related to creativity, which leads to my definition of creativity: the wise application of knowledge to existing problems or opportunities in such a way that something new and innovative emerges.

In Acts 6, the problem was the widow care. The biblical precedent that existed was the instance when Moses selected helpers (or something akin to deacons) because he was overwhelmed; later, elections were also common in Israel to elect synagogue leaders. So the apostles applied existing knowledge (getting leaders help and holding elections for those helpers) in a new way—a wise way—to address a current problem and the result was creativity: a group of men who we label deacons today.

What's my point? The church should be the bastion and vanguard of creativity. We have the Creative Spirit of God in our midst. We should not be looking to solve new problems with the solutions of the past. We are bound to our traditions when we don't see creativity as a function of the church and believers, or when fear causes us to retreat to the tried-and-true procedures rather than experiment with new applications of tried-and-true wisdom principles that can lead to innovation.

I urge you not to settle for what's been done, but take what's been done and pioneer something that has never been done. The world is not waiting for us to debate the role of deacons, but to find 21st century solutions to modern challenges that are the equal of what the apostles did in Acts 6. When we do, we will be working with the wisdom of Proverbs 8 that was present when God created and structured the world. And when we do, one thing is certain: There is no greater creativity with which you and I can work.