There are many byproducts and interesting trends emerging from the pandemic. One of them is the 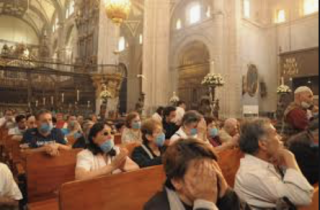 struggle for economies to re-open. Part of the problem is that we have learned to live with so much less that many are hesitant to spend cash on what they can live without. It has also caused us to step back and see where our economy has gone over the last decade. In my estimation, much of our creativity has gone into making what already exists a little better or a little different. For example, the first microbrewery was innovative, but do we need hundreds of them? Probably not. The same is true for yoghurt shops, health spas, and retail stores selling cheap junk from China.

My main focus, however, has not been the economy but the church during this season. Tomorrow, many churches will reopen, having done a "deep cleaning" with seats spaced for appropriate social distancing. During the pandemic, I saw a lot of creativity from the church but I did not see a lot of innovation—the creative use of something that changes culture and not just the expression of cultural values or norms. Let me give you an example of what I consider innovation and you will understand what I mean.

Did you ever give any thought to where the synagogue came from, or how or why it emerged? There is no mention of a synagogue in the Old Testament. The first mention is in the gospels and by then, it was an important part of Jewish life and worship. How did it become so popular and prominent?

It seems that the Jews had a pandemic of their own in 586 BC when Nebuchadnezzar ransacked Jerusalem and the Temple along with it. The entire focus of Jewish life had revolved around the Temple and and the sacrificial system. Then suddenly, just like we experienced in the last few months, their worship focus was gone.

Some of the Jews stayed behind in Jerusalem but most who survived were carried off to Babylon, home to many temples devoted to idols that were off limits to Jews. What did the Jews do? They innovated. They adjusted from the Temple system with animal sacrifice to the synagogue with a reading and study of the Word as the main emphasis. When they returned to Judea 70 years later, they did eventually rebuild the Temple, but by then the synagogue was firmly established as an important part of their worship culture.

Where am I going with all this? Churches flocked to use social media during this pandemic, some who had been vocal opponents of its use prior to the lockdown. They had the attitude "social media and technology are an abomination to the Lord . . . and an ever-present help in time of trouble," but made it clear that this was only a concession to the unusual times. Many saw their "numbers" go up and their finances hold steady (those who still refused to engage it cannot wait to reopen for their lifeline to the people had been cut off). Some gave testimony that people were "watching" them from foreign lands and some had people surrender their lives to the Lord through the use of technology.

We saw churches conduct drive-in church services using their car radios in church parking lots. We had drive through prayer and hearing lines. There were many other examples of creativity, but now that the "pressure" is off, can we still be creative? We were creative in our deployment of technology but can we now also be innovative?

These are only a few of the ideas I can come up with that I consider both creative and innovative that will help us make the transition from Jerusalem to Babylon as the Jews had to do. I would suggest that social media should be our synagogue-like response to current events. As we rush back to church, and well we should if we can and it is safe, let us not forget the pandemic lesson that technology is the next best thing to being there and has shown us the possibilities for a whole new concept of the church's mission.

Posted at 09:27 AM in ChangeTheWayWeDoChurch, Current Affairs | Permalink | Comments (0)