We are almost finished with our look at the woes that Jesus delivered in Matthew 23. This week, we 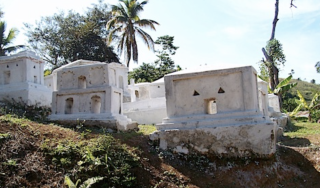 In the essay on the fifth woe, we saw how the leaders were more interested in cleaning the outside of the cup, so to speak, while ignoring cleansing the inside, which was more important in God's eyes. This woe continues with that that theme, The problem with this woe is that people were coming into contact with the leaders and there was no benefit. Let me explain.

Jews were not permitted to come into contact with a dead body or else they were rendered ceremonially unclean, which meant they could not participate in Temple worship or sacrifices:

“Whoever touches a human corpse will be unclean for seven days. They must purify themselves with the water on the third day and on the seventh day; then they will be clean. But if they do not purify themselves on the third and seventh days, they will not be clean.  If they fail to purify themselves after touching a human corpse, they defile the Lord’s tabernacle. They must be cut off from Israel. Because the water of cleansing has not been sprinkled on them, they are unclean; their uncleanness remains on them (Numbers 19:11-13).

Anyone in Israel who would whitewash a tomb was putting an outward decoration on something that was anything but beautiful or desirable. Jesus was not insinuating that anyone who "touched" these leaders were unclean according to the Law, but He was saying that those people were not helped because of the leaders' spiritual condition—and that is the exact opposite of what God intended to happen when His shepherds or leaders interacted with His flock. This was always a serious problem for the Lord:

“Woe to the shepherds who are destroying and scattering the sheep of my pasture!”declares the Lord. Therefore this is what the Lord, the God of Israel, says to the shepherds who tend my people: “Because you have scattered my flock and driven them away and have not bestowed care on them, I will bestow punishment on you for the evil you have done,” declares the Lord. “I myself will gather the remnant of my flock out of all the countries where I have driven them and will bring them back to their pasture, where they will be fruitful and increase in number. I will place shepherds over them who will tend them, and they will no longer be afraid or terrified, nor will any be missing,” declares the Lord" (Jeremiah 23:1-4).

Paul was clear as to God's expectations for results from the leader/follower relationship: "This is why I write these things when I am absent, that when I come I may not have to be harsh in my use of authority—the authority the Lord gave me for building you up, not for tearing you down" (2 Corinthians 13:10); "If we are distressed, it is for your comfort and salvation; if we are comforted, it is for your comfort, which produces in you patient endurance of the same sufferings we suffer" (2 Corinthians 1:6); and

You are witnesses, and so is God, of how holy, righteous and blameless we were among you who believed. For you know that we dealt with each of you as a father deals with his own children, encouraging, comforting and urging you to live lives worthy of God, who calls you into his kingdom and glory (1 Thessalonians 2:10-12).

When people had an encounter with Jesus, they usually came away better than when they first arrived. That is how God expects the interaction to be between His people and His leaders. That can only happen when the leaders, while not perfect, are not pretending to be in a better spiritual place than they truly are. That requires transparency and humility, but it makes the leaders able to help others who are on the same spiritual journey to wholeness as the leaders. Then those leaders can feed and tend God's flock just as Paul did—as one encouraging, comforting, and teaching example of a follower of Jesus.