Recently I began a leadership series based on Jesus' message to the Pharisees in Matthew 23 that contained seven warnings all marked by the word "woe." Woe is a term that designates sadness or doom and can be contrasted to the word "blessed" or "happy" that Jesus used when He began His public ministry: "Blessed [happy] are the poor in spirit, for theirs is the kingdom of heaven" (Matthew 5:3). This week, let's look at the second woe and see what we can learn and apply to our own 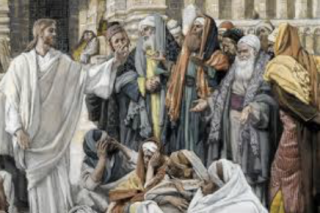 “Woe to you, teachers of the law and Pharisees, you hypocrites! You travel over land and sea to win a single convert, and when you have succeeded, you make them twice as much a child of hell as you are" (Matthew 23:15).

Paul himself summarized the problem with the leaders of his people when he wrote, "For I can testify about them that they are zealous for God, but their zeal is not based on knowledge" (Romans 10:2). God expects His leaders to focus on the important things—His priorities—and build His kingdom and not their own. The leaders in Jesus' day were doing the opposite.

What's more, because they had not achieved any spiritual maturity themselves, they were incapable of leading anyone to a better place in the Lord. Therefore, their converts were actually farther removed from spiritual reality and thus incapable of entering into any kind of healthy spiritual place.

In modern terms, we would label anyone who travels to recruit followers to a particular belief as an evangelist. Jesus indicated that there were Jewish evangelists who traveled to make converts to Judaism. My personal theory is that Saul was such a man. When someone needed to go to Damascus to hunt for believers (see Acts 9), Saul volunteered to go because he had been there before. No member of the Sanhedrin wanted to go to a Gentile land for fear of becoming unclean, but Saul had no such fear because he knew how to travel and stay undefiled. He had been to Damascus (and other cities) to further Jewish interests but the Lord apprehended him to confront him with the reality of woe number two. Saul was making his converts twice the son of hell that he was, but then became an evangelist who set people free rather than burdening them with useless traditions.

God expects His leaders not to bind up followers under legalistic rituals and rules that limit their creativity and growth. They must teach followers how to apply general principles to the new challenges every generation must face so the Lord is honored and His purpose served and enhanced. This includes denominations and faith-based organizations that delight in having their adherents follow the traditions they have honed over time rather than a life of the Spirit who leads and guides His followers into all the truth.

What kind of leader are you? Are you setting people free or binding them up? Don't answer too quickly, but instead seek the Lord to help you understand what kind of evangelist you are—one who recruits people to a life of freedom or a life of bondage.