Three down and two to go in our series outlining my latest thoughts on the practice of leadership. So far, we have looked at the following ideas:

And now it's time for thought number four, which is:

4. Leaders have the power to transform people and communities—for good or bad. 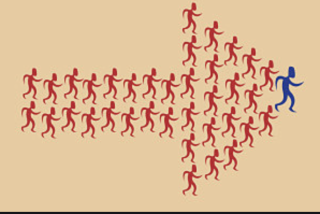 When I think of the leaders in the Bible, they were all involved in the lives of their followers to such an extent that the followers were changed and impacted individually and then corporately. Don't believe me? Then consider these examples:

We could go on to discuss Nehemiah, Esther and Mordecai, Elijah and Elisha, and then Peter and Paul in the New Testament. When those leaders emerged, things happened and people were inspired, healed, delivered, and the nation was transformed from what it was to what it could be.

Leaders have this power for good or bad by God's design. God ordained leadership, and laid down rules and regulations for how leaders were to behave. When bad leaders come along, God does not scrap the concept of leadership and try something else. He replaces ineffective leaders with other leaders. One of Jesus' last acts on earth before His death was to make a significant statement about leadership at the Last Supper:

Jesus knew that leadership power was so intoxicating that the only antidote to keep leaders from self destructing and leading their people astray was service to others in a spirit of love. This is so rare, however, that Paul wrote a testament to Timothy because of his unusual ability and proclivity to serve:

I hope in the Lord Jesus to send Timothy to you soon, that I also may be cheered when I receive news about you. I have no one else like him, who will show genuine concern for your welfare. For everyone looks out for their own interests, not those of Jesus Christ.  But you know that Timothy has proved himself, because as a son with his father he has served with me in the work of the gospel (Philippians 2:19-22).

Paul had many leaders in his sphere of influence, but only Timothy served others with selfless intent. All the others, and that includes men like Luke, Titus, Silas, and Onesiphorus, could not measure up to Timothy's selflessness. That is the reason Paul left Timothy behind in many places when persecution would not permit Paul to stay so he could set things in order. Places were never the same after Paul and Timothy came to town because godly leaders transform the people into individuals who can then join with others to form as the American Constitution says, "a more perfect union."

We are prone to be transformed for the good because leaders, like the ones in the Bible, are a rare thing. When circumstances reveal an Apostle Paul, a Churchill, a Mandela, a Lincoln, a Pope John XXIII, a Florence Nightingale, a Sojourner Truth, a Martin Luther King Jr., or a Frederick Douglas, we study their lives because they inspire us to fly higher and farther than we thought possible. When we encounter a Mao, a Hitler, an Alexander the Great, a Mussolini, an Idi Amin, or a Pol Pot, we study them because of the damage they did and the people and nations they destroyed.

Because leaders have this power to build or destroy, we must study leadership principles to learn from the best and worst. At the same time, we must recognize that leadership is like a powerful explosive. When deployed properly, it can be a great tool with which to build and shape, but when deployed poorly, it will do great harm that may take generations to overcome. I want to be a leader that improves the lot of people and organizations, even nations, when I have the chance. That means I have to take seriously all that I have written so far, and the last article that will come next, which states my fifth thought: We have a leadership crisis in the world, especially in the church. Talk to you next week.