A Ring, A Porsche, and a Blast from the Past

My trip to Oklahoma City last week was a good one all the way around. I reconnected with my friends at Victory Church where I spoke to staff and in both Sunday services. I met with my friends Ted and Tami Miller, and I worked on an exciting new book with author Jed Chappell. I also ate at Swadley's, my favorite BBQ restaurant three times. There were three unusual things that happened during the trip that I just had to share with you.

Last Friday, I went for my morning walk covering 2.5 miles. When I got outside my hotel, I realized I had not removed my rings and they were tight on my fingers, so I took them off and put one in each pocket. I put my wedding ring in my left pocket because I my phone was in that pocket, and I never remove my phone--or I had not up to this particular morning.

As I walked, I saw a few things I wanted to show my wife when I got home, so I did what I usually do not 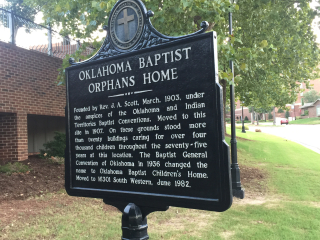 do--I took out my phone to take some pictures. My last stop was a historical marker explaining that the site was formerly an orphanage for Native American children. Today, it is the home for a beautiful new bank building, which I thought was indicative of our culture--we used to take care of children, but now we take care of our money.

When I got back to the hotel, I reached into my left pocket and my wedding ring was gone, having fallen out someplace along my walk route. I drove to the places where I knew I had taken pictures but could find nothing. I decided to suspend my search until the next morning when I would walk again, 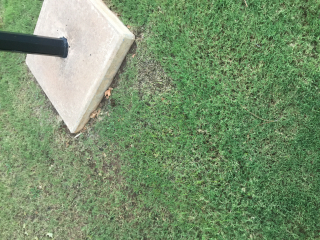 retracing my Friday route. It was hot and I figured no one was going to be out walking, so my ring would probably stay put, if it was even visible.

Around 5:30 that day, I turned onto my hotel road, but pulled over to go look once again at the area around the marker. This time I walked up into the grass where I had taken the picture and, lo and behold, there in the grass was my wedding ring, right where I had dropped it nine hours earlier.

On my way home, I flew through Atlanta, which is a big airport. My plane pulled into Terminal A, but I had to go all the way to Terminal F (1.25 miles away--I know because I have walked it before). I was deciding whether to walk or ride the tram as I walked off the plane when a young lady right outside the plane door was calling my name. My first thought was, My flight home has been cancelled and they are here to tell me personally.

Instead, the Delta Airlines official asked, "Would you like a ride to Terminal F?" When I responded I would, she said, "Follow me," and led me to the stairs where baggage handlers enter and exit the jetway from the tarmac. We walked down the stairs and Nicole (from Venezuela) put my briefcases in the back of the car. When we got in, she said, "You spend so much time in an airport and we thought this would help you out." She then proceeded to drive me through all the planes and baggage carts across the airport to Terminal F. When I inquired what kind of car we were in, Nicole responded, "A brand new Porsche." I asked her if she could drive me home to Pittsburgh, but she said she could not. Oh well, I tried.

A BLAST FROM THE PAST

After I spoke in the first service last Sunday, a man came up and stood before me, not saying anything. Finally, he spoke and asked, "You don't remember me, do you?" I thought he looked familiar but could not place him. He then identified himself as my college fraternity brother, who I had not see in 47 years! Naturally, I was surprised and we talked as much as we could, for I was selling books and people were coming and going at my table.

When I looked Lou up later, I found out that he was a wealth advisor and guess where his office is? His office is close to the historical marker where I lost my ring. I was staying in a hotel across the street from a man who I once knew but had not seen in almost five decades. I would have never known, except that his assistant sent him an invitation to church, he saw my name, and decided to come check me out.