Home Archives Profile Subscribe
One Step Closer
Kenya Update: Almost, but not Quite

I have been reflecting on Isaiah 6 the last few weeks and thought I would share my conclusions with you as they pertain to God's role and our role in fulfilling our purpose and being creative. First, let's look at Isaiah 6:1-8:

In the year that King Uzziah died, I saw the Lord, high and exalted, seated on a throne; and the train of his robe filled the temple. Above him were seraphim, each with six wings: With two wings they covered their faces, with two they covered their feet, and with two they were flying. And they were calling to one another: “Holy, holy, holy is the Lord Almighty; the whole earth is full of his glory.” At the sound of their voices the doorposts and thresholds shook and the temple was filled with smoke. 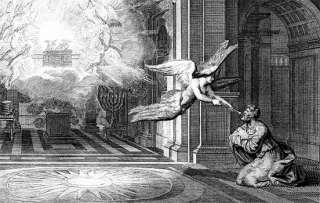 unclean lips, and my eyes have seen the King, the Lord Almighty.” Then one of the seraphim flew to me with a live coal in his hand, which he had taken with tongs from the altar. With it he touched my mouth and said, “See, this has touched your lips; your guilt is taken away and your sin atoned for.”

Then I heard the voice of the Lord saying, “Whom shall I send? And who will go for us?” And I said, “Here am I. Send me!” (emphasis added).

What can we learn from this commissioning or calling?

Immediately, Isaiah volunteered for the job opening that God announced. Notice, that while God spoke in the singular, He also spoke in the first person plural, indicating that He had discussed with other members of the Godhead the need to send someone to His or their people!

Isaiah did not wait for confirmation, pray about his decision, share it with anyone to get their opinion, or need to know the specifics before he said, "I'll go!" It seems that he was free to go or not go, but God immediately accepted his offer and spelled out what he would say, how the people would respond, and how long he would serve.

This scenario leads me to believe that we have more say in what we will do for the Lord than we sometimes think we do. Often people say, rightly so, that "I will do whatever God wants me to do." That is noble and  consistent with our role as servants of the Lord. Yet, we are also friends of the Lord, as Jesus indicated in John 15:14-15: "You are my friends if you do what I command. I no longer call you servants, because a servant does not know his master’s business. Instead, I have called you friends, for everything that I learned from my Father I have made known to you." As friends, there may be something in your heart that you want to do. Is it time that, like Isaiah, you say, "Here I am, Lord, send me" or "use me" or as I tell my college classes, "Put me in, Coach!"

Second Chronicles 16:9 states, "For the eyes of the Lord range throughout the earth to strengthen those whose hearts are fully committed to him." God is looking for people who are willing to do His will, not those who have to be coerced and commanded to do it. As the Lord searches the earth today, I want to be among those He notices whose hearts are His. Will you join me as together we put aside our role as servant for just a moment and be friends of God in the tradition of Isaiah?