Zimbabwe has the most amazing blossoming trees.  They are not fruit trees and some of them are 30-feet tall!  And there are many trees in bloom every season of the year; it's not just during a certain season.  When I point these out to the locals, most express surprise, don't know what the tree is named and claim they don't even notice them any more.

October is the month for the Jacaranda to blossom and they are a magnificent purple.  I thought I would share a few pictures with you, but believe me, the real thing is even more spectacular. 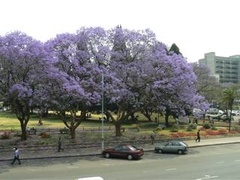 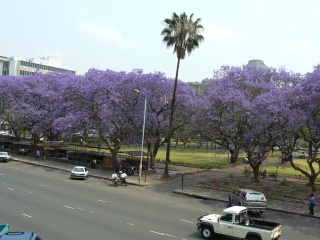 john...it so happens that the Jacaranda tree is a favorite in our town of Fullerton, Ca! They are all over town and blossom here mid-May to mid-June. It is glorious. There are whole streets that explode in that unique purple color. I have a friend who married on memorial day weekend so that he had an annual reminder of his anniversary when the Jacarandas blossomed. Their wedding colors included that shade of purple!

I believe the name is originally a Portuguese word.

The Jacaranda, Jacaranda mimosifolia more often known simply as the "Jacaranda", is a sub-tropical tree native to South America that has been widely planted elsewhere because of its beautiful and long-lasting blue flowers. Older sources give it the systematic name Jacaranda acutifolia, but it is nowadays more usually classified as Jacaranda mimosifolia. It is also known as the Black Poui, or as the fern tree. In scientific usage, the name "Jacaranda" refers to the genus Jacaranda, which has many other members, but in horticultural and everyday usage, it nearly always means the Blue Jacaranda.

The Blue Jacaranda has been cultivated in almost every part of the world where there is no risk of frost; established trees can however tolerate brief spells of temperatures down to around −7°C (20°F). In the United States, it can be grown in many southern states, if necessary in containers. It is only regarded as naturalised in Miami-Dade County, Florida and Hawaii. It is regarded as an invasive species in South Africa and Queensland, Australia, the latter of which has had problems with the Blue Jacaranda preventing growth of native species.

The tree grows to a height of 5 to 15 metres. Its bark is thin and grey-brown in colour, smooth when the tree is young though it eventually becomes finely scaly. The twigs are slender and slightly zigzag; they are a light reddish-brown in colour. The flowers are up to 5 cm long, and are grouped in 30 cm panicles. They appear in spring and early summer, and last for up to two months. They are followed by woody seed pods, about 5 cm in diameter, which contain numerous winged seeds. The Blue Jacaranda is cultivated even in areas where it rarely blooms, for the sake of its large compound leaves. These are up to 45 cm long and compound, with leaflets little more than 1 cm long.

Pretoria, the administrative capital of South Africa is popularly and poetically known as Jacaranda City or Jakarandastad in Afrikaans because of the huge number of the trees which turn the city blue when they flower in the spring. The name Jakarandastad is frequently used in Afrikaans songs, such Staan Op by Kurt Darren.

People in Australia sing a Christmas song about Jacaranda trees, as the blooms are only seen in summer time — as the song explains, "When the bloom of the jacaranda tree is here, Christmas time is near".

In Argentina, writer Alejandro Dolina, in his book Crónicas del Ángel Gris ("Chronicles of the Gray Angel"), tells the legend of a massive jacarandá tree planted in Plaza Flores (Flores Square) in Buenos Aires, which was able to whistle tango songs on demand. María Elena Walsh dedicated her Canción del Jacarandá song to the tree. Also Miguel Brascó's folk song Santafesino de veras mentions the aroma of jacarandá as a defining feature of the littoral Santa Fe Province (along with the willows growing by the rivers).